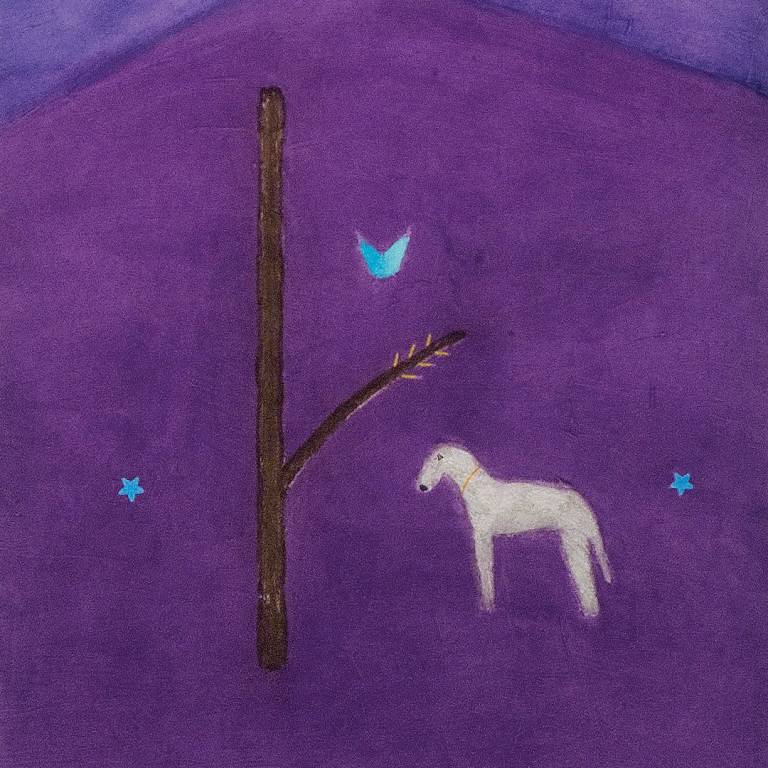 Aitchison is particularly well known for his still-lifes, landscapes, nudes, portraits, dogs, and his idiosyncratic crucifixions and, alongside this subject matter, for his distinctive style consisting of simplistic, flat, stylised forms constructed through areas of thinly applied, yet pure and luminous colour. Uniting British Romanticism with an inheritance from the Italian Renaissance of interest in the relationship between line and colour, light and dark, subject and landscape setting, Aitchison produces work of powerful naiveté. Examples of Aitchison’s religious paintings include a Crucifixion loaned to King’s College Chapel since 1994 and Cavalry (1996-98) commissioned by Liverpool Cathedral. Aitchison also collaborated with Glyndebourne Opera House, decorating the Gallery Stalls in 2005. 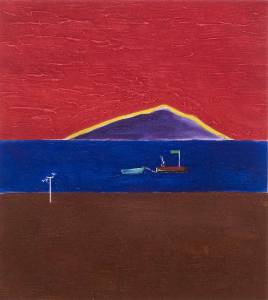 With Hand Colouring in 31 Colours Edition of 60 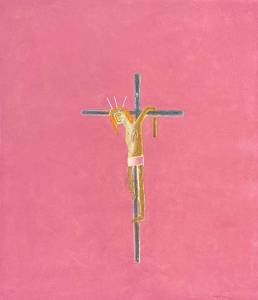 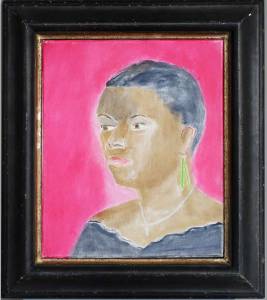 Portrait of Naaotwa with Green Earring 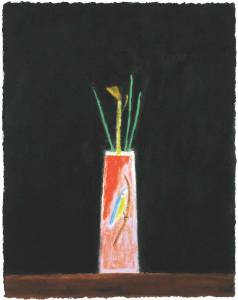 This print is a loose sheet in a folio folder and catalogue set. 'Pictures' bound dark blue cloth hardback. The print is unframed. 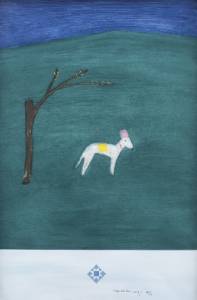 With hand colouring and collage, Edition of 50

Craigie Aitchison published two very special prints with Rabley Editions in 2009 . The subjects are his beloved Bedlington terriers ‘Wayney’ and ‘Sugarbush’. Limited numbers of these etchings are available exclusively from Rabley Gallery.

We have just added the beautiful little print Craigie Aitchison ‘Still Life with Bird Vase’ 2004 to our online shop. Click to BUY NOW. This print comes with a hard bound catalogue ‘Pictures’ and folio set, the print is a signed limited edition original as a loose sheet in the set.

Craigie Aitchison was born in Edinburgh in 1926, and studied Law at Edinburgh University (1944-46) and then at the Middle Temple in London in 1948. He changed career in 1950, returning to Edinburgh to practice painting before studying at the Slade School of Fine Art (1952-54) under William Coldstream and Robert Medley, and alongside Paula Rego and Euan Uglow. In 1955 Aitchison was awarded the British Council Italian Government Scholarship for painting and travelled to Italy, which had a profound influence upon his work. His first solo exhibition was at the Beaux Arts Gallery in London in 1959, and he continued on to have significant retrospectives at the Serpentine Gallery in 1981, at the Gallery of Modern Art in Glasgow in 1996 and at the Royal Academy in London in 2003. In 1994 he won the first ever Jerwood Painting Prize and won the Nordstern Art Prize in 2000. He was elected an Associate Member of the Royal Academy of Art in 1978 and a Senior Member in 1988, and he was made a CBE in 1999.

He died in 2009. Several of his works are held in the collections of the National Gallery of Scotland and Tate Gallery.